Jalie’s new pattern collection comes out TOMORROW! Now of course, I’ve sewn up some pieces from their new collection, BUT I also got some sewing done from their existing catalog too!

If you’ve followed my blog for a while, this t-shirt might look familiar to you. (When you’re on a good thing, why change, right?) I just love the Jalie Women’s T-shirt Pattern (I’ve made it here, here and here), especially in the v-neck style. It always looks so ready-to-wear, and it’s actually pretty easy to pull off!

I received this orange cotton lycra fabric back in December (eep!) from Simply By Ti, and had full intentions to make a t-shirt with it for Miss 7. But then she saw it and declared she didn’t want an orange t-shirt because it would make her look like a carrot! So that project went on hold. For a while. A long while.

But I knew I had to get SOMETHING made with this fabric and I couldn’t move my brain beyond a t-shirt, so I decided to proceed with the project but include some stripe accents. (I got these ones in a mystery box from Wolf & Rabbit Custom Fabrics – it’s a narrow navy blue and white stripe). 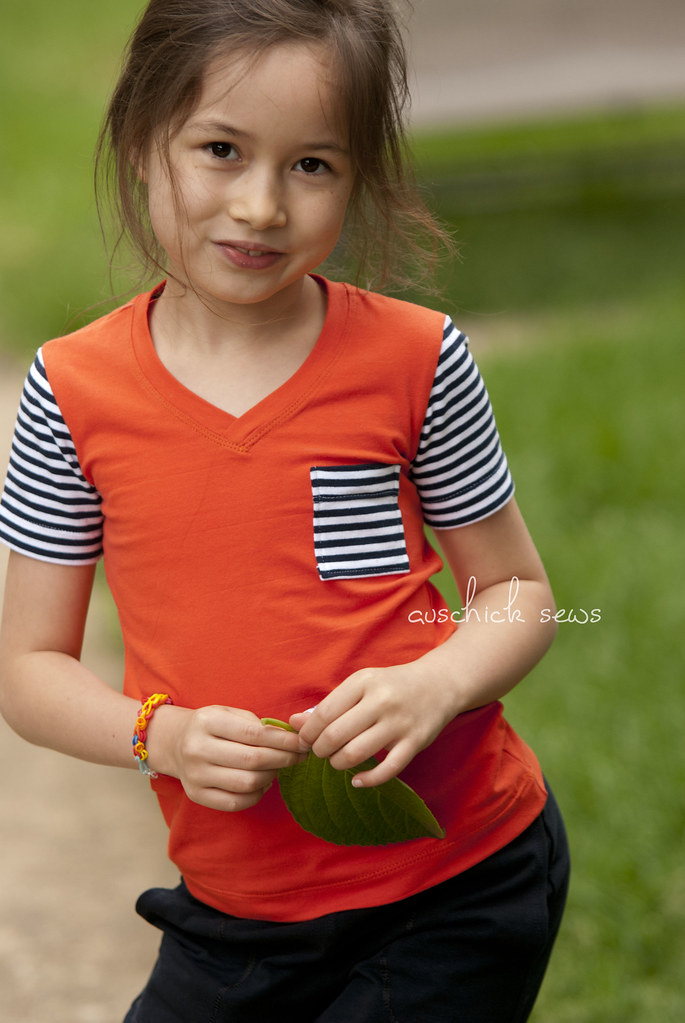 I was worried that the stripes would read Jailhouse Chic, so decided to add the pocket on the front to hopefully avoid that look!

My daughter seriously needed more sweatpants, so this was a good opportunity to make that happen!

The Jalie Sweatpant pattern actually comes bundled with a sweatshirt and hoodie pattern, and like most other Jalie patterns runs from 2T – Womens 22. In the children’s sizes, it’s suitable for both girls and boys, and Jalie have some info on the pattern listing for sizing it for men.

The pants are super quick and easy to construct – they have 3 pattern pieces – a back and front leg, and a pocket.

I changed up the construction method so that everything was done in the flat and I could then easily reinforce the crotch seam with my coverstitch. Here’s the way I do it (after the pockets are on):

I made two pairs of these pants for my daughter – one in a navy blue fleece from JoAnn, and the other in navy blue French Terry from Simply By Ti. I spent a lot of time debating if this one was navy or black. Turns out it’s a super dark navy. She has run out of it now, so I’m not sure what the next dye lot will be like.

Right now, she’s super excited about the fleece pair, but I think once we get more humidity she’ll quickly fall in love with the French Terry version.

Disclosure: I’m a Jalie Patterns Creative Ambassador and received these Jalie patterns complimentary for purposes of review and promotion.

I’m a Simply By Ti Ambassador and received the cotton lycra and french terry complimentary in exchange for review and promotion.