I knew the Halla Patterns Stardust t-shirt would look amazing when it was completed, but ugh, it was a time investment! My sewing machines decided this would be the shirt from heck, and none of them would cooperate. Sigh. 20+ seams ripped out later, I got it done. 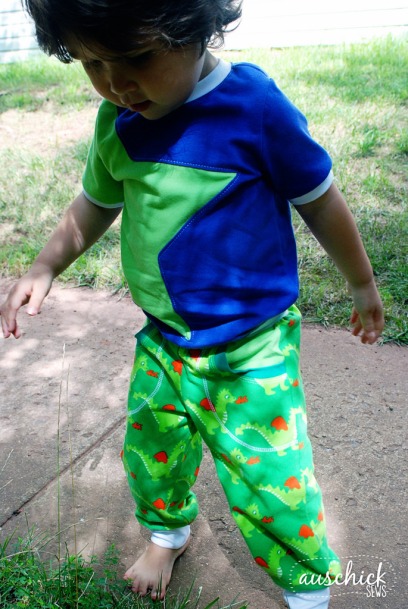 I fully suggest watching the youtube video prior to sewing the star. The instructions in the video are a little different to those in the pattern.

Yes, I would sew this again. It’s a really cool, unique shirt. And I hear it gets easier. I just need to make peace with the gremlins in my sewing room first.

Also, I would suggest that instead of printing out the neck band as is, measure the neck hole instead and cut the piece to be ~85% of the neck hole’s length (of course this depends on what fabric you are using for your bands). I had to do this in order to eliminate gaping.

(Learn all about the Halla Patterns Kids Lounge Pants and beautiful Znok fabric over here.)